Nadal was no easy opponent to beat. He left Federer stunned with some of his forehands and he took full five sets and sent Federer over the threshold. But it is at these moments of intense competition that a star can play his best and what we saw in the final moments was Federer at his best.

Spaniard Nadal was definetly the stronger and more ferocious of the two but it was the crucial leap from 2-2 to 4-2 in the final set that sealed the Championship for Federer. It is not easy to be a defending champion, playing against Nadal, to whom he lost the French Open finals and race towards victory taking each game, one at a time, confidently. Those final 10 minutes one can see the star like Federer orchestrate his best. His tennis is strong, composed and intuitive. His mental agility is unmatched. Although i don’t prefer Federer nearing Sampras records, i still give it to him for the star he is. He matched the legendary Bjorn Borg’s record of five consecutive titles in Grand Slam and is two short of Sampras’ record.

Although he could reach there, he would have to look out for Nadal, the man is learning to play excellent tennis in Grass. Nadal is the undisputable leader of clay so there is something to look out for next year.

Roger Federer is making and breaking history and although Nadal played magnificently, may the best man win and he did win!! Roger Federer – King of Wimbledon. 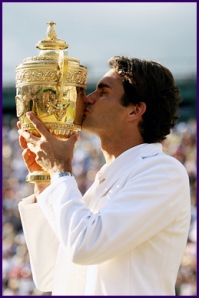