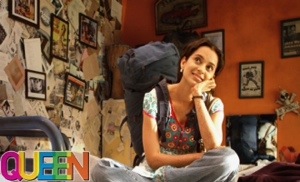 Losing hand
In a drunken reverie Rani(Ranaut) professes how her life mirrors Gupta uncle. That uncle who never let the stench of tobacco near nor laced his lips with alcohol yet somehow succumbed to the misery of cancer. This is her. She has obeyed every rule in the book; never defied her parents; was subservient to her fiance and played a pushover to the world yet life dealt her a losing hand; Love lynched her and destiny ditched her.  Why her? And more importantly what now?

Runaway but not revolting
Rani after being dumped at the altar decides to honeymoon alone. Why does she do it? Earlier on we see how she saves every penny towards her honeymoon fund (which is visiting her most favorite cities Paris and Amsterdam). So when she is robbed of the romance why give up this treasured dream? She quietly confides to her dad that she wants to go but will not if he chooses otherwise. She does not defy yet calmly expresses her decision. For a girl who has hardly stepped out of Rajori she decides to globe-trot, alone. Only she isn’t fully prepared.

Pushing boundaries
In Paris, she hardly leaves her room. Her grandmother chides her “if you just wanted to watch the Telly, why go all the way to a different country” – a nudge here. Her epic encounter with vijaya lakshmi(vijay) shoves her further in exploring the city. She is still terrified of the Eiffel which as lovers they had declared to visit together. But she decides to hang around. She gets drunk, dances in public and almost gets arrested, all of which her fiance and his mummy would have resented. But she is having a ball by flying solo.

In Amsterdam she has yet another territory to invade. Her roommates are all men and she cannot coexist with the (unrelated)opposite sex in the same room. It’s not whether she trusts them but it’s rather that she is not(yet) strong enough to take this step. Eventually she conquers this too. She learns to befriend them, converses freely about her life and yet sticks to her boundaries.

Finally when the fiance comes begging to take him back, she doesn’t give him a speech about how she has changed etc. She reminds him pleasantly that she has other plans and they should meet in Rajori. She is buying time but remembers to pay for herself. I can take care of myself and no I don’t need a knight in a shining armor to stand beside me.  Also she wears a new outfit that she brought for herself in Paris not to swoon him but to state that she knows she is beautiful inside out.

Feminist yet fragile
Rani is elegant, gullible and sheer poetry. Her search to find her strength within the confines of her identity is the cynosure of this well crafted film. We see Rani lip locking with a foreigner but it is brief and does not lead to this-will-never-work-out sob story. Rani is a feminist in the sense that she learns to stand out, speak her mind and yet learns to be respectful. (Even when she meets her ex fiancé’s mother she pays her respects.)

Queen reinforces my belief that feminism is not only about wardrobe choices, physical and sexual freedom but about more significant aspects like attitude and identity. In the end, Rani hugs Vijay and thanks him for giving her a chance to go on this journey but I thank Rani for coming back with her core spirit intact because that is something nobody can deny or steal from you.

In a movie hailed as the comeback of the queen of silver screen, feministic undertones are not only laudable but heartwarming.

Every scene of English Vinglish is crafted beautifully. Every expression, every sigh, every look and every frame is the work of a perfectionist. Or it is the work of Sridevi, who not only understands the travails of a home maker struggling to keep herself happy but also braves the odds to liberate her from the clutches of language. But seen from the vantage point of an immigrant, there are some unique aspects that stand out and amuse me.

• Why is it that during my innumerable trips to and from India, my economy seating has never been accompanied by Ajith or Amitabh? But if I were to lament, I would prefer Surya. Now that’s worth feigning ignorance. The hostess never offers Chardonnay or Merlot instead stares blankly through the cartons of Apple &amp; Orange juice.

• It is eternally warming to see Sridevi strolling through the streets of NYC in a sari. If there is one place in the world outside of India, where a sari can be worn with elegance and get its standing, it is in NYC. Nobody gawks or mocks at you and you don’t have to make excuses for sporting one. When invitations to parties leave me in wardrobe failure, there is a twinge of pride to see her walking tall in the six yards. It is sometimes the outfit but always the real YOUthat stays with people long after you have walked out.

• The movie silently puts forth certain stereotypes. The French chef, Spanish nanny, gay New Yorker, south Indian software professional, Pakistani taxi driver, Chinese parlor girl, Indian home maker but does it in a way that is not derogatory to either one. In a way, to see their friendships evolve and develop is amusing. The barriers, it seems, are not in what we speak but how we speak.

• Shashi cooks deliciously. She is the super mom, super wife and super daughter in law who whips us a different breakfast for every member. Yet there are only two people who cherish her, the eldest in the family, her mother in law and the youngest, her son. When the man cooks it is art and when the woman does it, it is duty? After having a kid, cooking has become a chore. What was once therapeutic has becomes a necessary evil to quiet the grumbling stomach. Shashi’s parathas and ladoos are appreciated and devoured by her sister and nieces for whom these are delicacies. I can understand that kind of wistfulness when it comes to food. In a land far away from delicious home style take away’s, it is a blessing when the husband can appreciate the wife’s culinary abilities. And unless we let the man wield the spoon once in a while, they might never get the travails of being a chef.

• When the husband cuts her calls short using excuses as trivial as stepping into an elevator, he cannot handle her excuse for not accompanying them to view the Empire state. Men cannot handle rejection even after two kids? They always need a punching bag by their side so they can make mean jokes about Jazz? How many times have we seen newly married brides walking shyly behind their grooms? How many times have they remained mum when spoken to only to let their husbands do the talking? How many times have seen kids abuse their mothers and manipulate them? This is not unique to immigrants alone. It is definitely apt that Sridevi finds her voice and confidence in the end and does not cringe from using it. Though she pauses and falters along the way, she does go all the way and that deserves an ovation, a standing ovation.

Shashi, is empowered after conquering her weakness. It was learning a new language but it could be anything. She went out, braved the odds and emerged successful. In the end, she returns to her cocoon, silently yet with more strength when she enquires for a Hindi newspaper in the flight.

And Shashi is right; nobody can help yourself better than you!

Chetan Bhagat’s 2 States – The book is about a marriage between Krish Malhotra and Ananya Swaminathan which is irrelevant. What is relevant is the marriage between a Punjabi and a Tamilian, brahmin at that.

It starts of with a college romance set in the backdrops of IIM(A). While most of us are used to anecdotes on inedible mess food, low cost STD calls, we dont have a peek at the romances that blossom between the creme de la creme of Indian intellectuals. It is heartening that the conversations are not over head transmissions but Bollywoodish and a lot of love making involved. I guess Chetan Bhagat wanted to make sure that this gets made into a movie.

While there is little respect left for Chetan Bhagat after his 3 idiots debacle, 2 states comes as a surprise. He is responsible for readers turning to Indian authors for chic lit and fictions. A light read but not a must read.