Me before You is a book that challenges our choices, probes our relationships and generally pushes the boundaries of our understanding of love. “What do you do when making the person you love happy means breaking your heart?” This is the vital question that envelops the lead characters and leaves with a heavy lump in our hearts.

Moyes is a gifted storyteller. She fleshes out Louisa Clark and Will Traynor with authenticity and perfection. Louisa is perfectly happy leading her ordinary life and does not crave for extraordinary experiences. She has her reasons to set her life to a 5 mile radius even if it means that she has to stop dreaming. Her boyfriend Patrick is obsessed with fitness and she couldn’t care less about her curves. Life was ambling along until she loses her job.

Will on the other hand has travelled the world, challenged his comfortness and explored every nuance of risk. He wants to live life not just pass time until an accident changes it upside down.

We understand and accept why Louisa falls for Will and gradually begin to cheer for her. We want her to succeed in her mission that she is earnestly working towards. But everything she has believed and hoped for is pulled under feet…

Jojo Moyes is poetic with her prose. She attacks sibling rivalry, sisterhood, family values and morality with equal aplomb. The book leaves us questioning our stand on life and love. It sets us thinking about our choices and also encourages us to just live. Because the next second can change everything.

Recommended reads: The girl you left behind.

The Menon’s classic love story Nee Thane en Ponvasantham trudges along while Mohan’s rulebook romance Kadhalil Sothapuvathy Eppadi races when pitted against each other.
Both talk tirelessly about the failings and triumphs of being in love. The petty fights, ego battles, endless search and finally moments dunked in romance. While the former spans various ages, the latter stick to one time frame. What Gautham Menon could not achieve even after directing a blockbuster like VTV, Balaji Mohan accomplishes in his debut effortlessly. And that sums up how 2012 went – Established directors faltering while newcomers delivered in style.
But let’s focus our lens on the NEP Vs KSY warfare. When you graduate out of college, your life is a little aimless. Very few are focused and if you are in love, you simply want to follow the significant other, career be damned. So when Parvathy decides to pursue her Masters abroad, Karthik gives it a thought as well. The same happens in NEP except we see a lot of talking, debating, lecturing and finger pointing that we just wish they would break up. Of course this is commonplace in a relationship but in KSY we want the leads to stay together and earnestly wish they would sort out the differences because we can sense their love for each other. In NEP, we only see them squabble. There is some amount of cuteness infused to propel the story forward but even that doesn’t keep our interests hooked.
KSY did not make any tall claims about being a musical. We saw the short film, found it hilarious, caught the trailer, found it engaging, saw the movie, laughed a lot and came out satisfied. NEP was an Illayaraja musical. So we eagerly awaited the audio release of this “Raja genre”, shuddered hearing Yuvan’s out of tune singing, dropped our jaws at the almost absent or out of place BGM and scratched our heads at the shoddy placements of songs. In the former we would have dismissed it as his first attempt but with the latter the bar is set, so he miserably fell short.
Both movies revolve around the leads exclusively. So their families and friends are given very little screen time and most of it is left to our comprehension. But KSY uses these external factors to provide the much needed comic relief and a boost to the narration. In NEP, they are mere caricatures. Even Santhanam who make us sigh in relief at his appearance does not quite cut it. Why does Varun’s father wait until the last minute to give him the “Be A Man” speech? Why doesn’t Nithya’s father worry when his daughter stays out all night? The VTV spoof does not fit well and why does Varun wait that long to go in search of Nithya?
KSY does not balk away awkwardly in the romantic scenes. NEP made us think of yesteryear movies where a flower or a lamp is propped up to signify the romance. This from a guy who shot the poetic Anal Mele Pani Thuli sequence in Vaaranam Aayiram.
Varun is from a lower income society, yet the brothers address each other casually as “bro”, the kitchen is modular and the bedroom is furnished with sleek wooden furniture. The same applies to Parvathy in KSY but there the furniture is cane and she uses a desktop which is more plausible. Why does Menon try desperately to inject the urban feel into a middle class milieu and ends up alienating both?
Of course, there are ample differences between the movies that we can peck at. But while KSY achieves its goal effortlessly as a light hearted movie, NEP fails miserably as a romantic musical. Maybe Varun and Nithya should have watched KSY before striving to walk the path of love. But it is my earnest hope that 2013 would be a year where directors do not take their audience for granted. 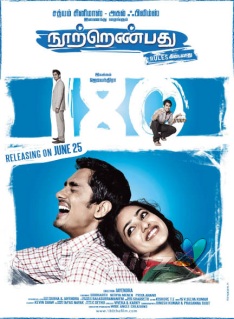 If Shankar had directed this movie, it would have lasted all but 30 minutes. The movie boasts of stunning visuals but we can soak it in quickly, you don’t have to pause to ensure we really do enjoy. Think Siddharth taking two steps backward after opening a door, this lasts for roughly a minute. Yawn!!!

The movie opens up in the banks of Ganges and your thirst for an urbane, crisp movie stops right there. The dialogues, characterization and intrigue are best portrayed here and are completely lost in the remainder of the movie. It becomes predictable and clichéd.

Every director has to be a good writer. You need to get the screenplay taut before you let the camera do its work. Obviously, Jayendra doesn’t believe in that. Just because you play golf with Mani Ratnam does not mean you can direct another Idhayathai Thirudathey. That was a classic, this is a wannabe.

Nithya Menon starts off on a good note and keeps it there. There are many highs in her performance -Movie Theater, enquiring about Mano, lost in love, she has talent and scores well. Priya Anand is a different story. She has a meaty role and lets it slip through her whinny and over the top act. She has a great figure but that is simply not enough, especially when we have to watch her for roughly half the time.

Siddharth delivers. Confused yet angry when Vidhya falls for him, Confused and excited when in love with Renu, he uses this movie as a great comeback vehicle. We have already acknowledged and accepted him as a city boy who charms the girls so it would have been refreshing if he had attempted a different tangent.

Jayendra makes his debut as a director. When it’s your first movie, there is always a scene or a part of the movie that is a testimonial to your brilliance. Having waited a really long time to make this movie, you expect details and care, not in just the visuals but the finer aspects – plot and screenplay. He misses that bus completely. There are scenes that are quirky but we have already seen that. Like the puthu vellai mazhai, Gautham Menon did that in VTV. There is no innovation, no twists and the movie plods along in the path well-travelled without attempting anything novel.

The part before the intermission is good on many levels. Chennai looks beautiful, costumes blend into scenes and mostly it’s fun to see Mano live life. The part after, is like nails grating on blackboards – annoying and you can’t wait to get out. Instead of appreciating and agreeing to AJ’s quest for anonymity we label him a self-absorbed jerk and that is where the movie plunges downward. But one of the merits of watching a movie in theaters is that the audience starts guffawing at the director’s ill attempts. That makes it easier to sit through.

Balasubramanien has extraordinary talent – everything is fresh, colors melt into the background, lighting is adequate and he takes the burden of the crew single handedly. Banu wields her magic touch and the leading ladies look even more beautiful. Shareth’s music becomes repetitive and he could have worked the BGM better.

Nootrenbadhu (180) could have been that urbane love story – old wine in a new bottle but it just reeks of stale odor.

A women trying hard to conceive and failing three times and a girl forever trying to find a mother in her own mom. The choices we make as girls can haunt us more in our later lives.
It is important to find love in life. I beleive that if you can wake up everyday with hope and love then getting through the day makes it that much more easier. Although romances are for books only it is nice to beleive in them. Lauren and Angie connect to each other and look out for each other and there is something charming about the DeSaria family. The mother who talks to the husband long after he is dead and the sisters who are opinionated but still manage to look out for each other. It is only when you have a family do you realize the importance of putting your loved ones in front of your own needs.
Kristin Hannah’s style of writing is really gripping and opens doors into your soul. The book was a lovely read and definetly recommended.